It’s been a year of great progress through 2022 for 20’s Plenty. That has been not only in campaigning but in new implementations. And the global adoption of 30km/h and 20mph limits is increasing alongside the UK. Please follow the links to more information and inspiration.

When we started the year we were pleased that we had over 500 local campaigns. But during 2022 we have helped set up 124 new local campaigns. An interesting statistic is comparing the number of 20’s Plenty campaigns with supermarket chains. In 2019 we overtook Waitrose, in 2021 we overtook Morrisons, and in 2022 we now have more than Asda!  And that is tens of thousands of campaigners around the UK calling for 20mph where people are required to share their streets with motor cars. 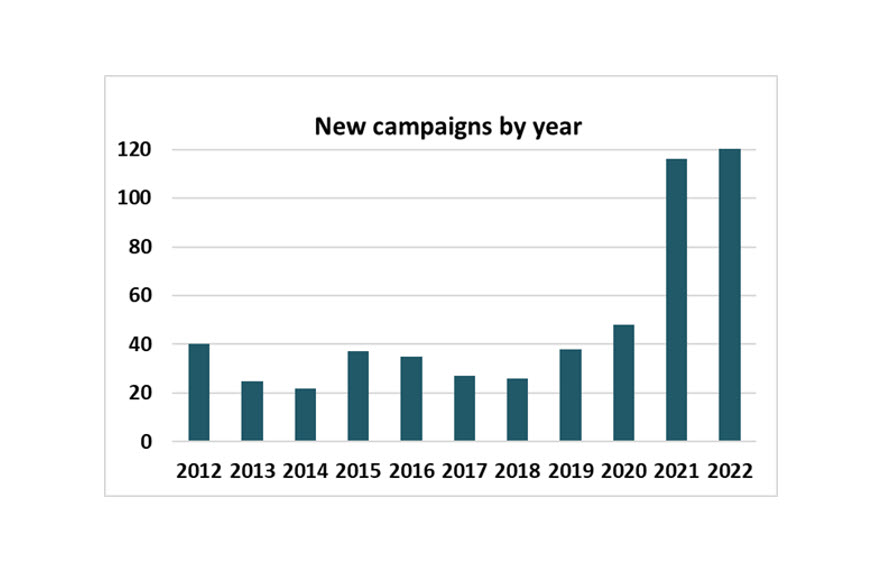 Most larger unitary authorities have already adopted 20mph limits on their urban roads; we are now seeing increasingly strong public support from shire counties and rural communities who want 20mph for their town and village roads. During 2022 over 300 Parish Councils passed motions calling for their county to adopt a 20mph norm. The focus on grass-roots campaigning within communities working with parish councils has been very successful in turning heads at county halls. View this short video from Cllr Philip Desmonde, Transport Lead in Cornwall.

The 20’s Plenty conference in Oxford in October was a huge success. And the Halford Mackinder Professor of Geography at University of Oxford, Danny Dorling, observed that “20’s Plenty has been one of the most remarkably successful campaigns in the United Kingdom in the last decade….”. The conference featured 20’s Plenty Campaigner of the Year, Jean Conway for her work in gaining a policy change in Oxfordshire, as well as presentations from campaigns in North Yorkshire, Ian Conlan, and Cornwall, Dean Evans. It also included presentations from the Welsh Government and councillors in Oxfordshire and Cornwall authorities. All the presentations and voxpops from the conference are available.

And in 2022, we developed our support for local campaigns with regular zoom discussions with campaigners, councillors and officers. We also have new resources in information, templates, graphics and banners available for campaigners. We also celebrated our 15th anniversary of being formed in November 2007.

We have seen new commitments in 2022 from local authorities to implement 20mph as a norm in a phased manner. This has happened in Cornwall, Herefordshire, Oxfordshire, Cambridgeshire and Southampton. In Durham and Doncaster we are engaged with local politicians and officers who are listening to calls to make 20mph the norm. In England over 18 million people now live in authorities where 20mph is the urban/village norm rather than the exception.

And additional authorities are improving their 20mph policy: not yet default, but heading that way. In North Yorkshire, West Sussex, Hampshire, Norfolk (implementing its first town-wide 20mph in Swaffham), Surrey (now with some rural 20mph roads) things are changing regarding 20mph implementations with wide recognition that the 2013 guidance allows 20mph for most roads including those with faster pre-speeds. And in London additional boroughs of Greenwich, Newham, Kingston upon Thames, Redbridge and Barking & Dagenham are all revising policies. For arterial roads controlled by Transport for London the commitment has been made to set all the roads within the North and South Circulars to 20mph.

Wales has now passed its legislation to change the national default limit for restricted roads to 20mph from 17th September 2023. It is now planning an informative package of engagement from the New Year. The guidance on setting exceptions has been published and local authorities are well advanced in their plans for on-the-ground implementation and mapping the exceptions.

Scotland is making similar plans to set 20mph as a norm by 2025. The Highlands Council is being used as a pilot and 20mph is being rolled out to 114 communities there. This builds on the experience from other Scottish authorities such as Scottish Borders Council where 20mph is already the norm and has shown that 20mph on faster roads reduces speeds twice that which was estimated in the DfT 2013 DfT guidance.

England is still dragging its heels on a national 20mph limit even after the national 30mph limit has been compromised by so many authorities declaring it not-fit-for-purpose. Local authorities are also putting pressure on the DfT and UK government to change the national. It is only a matter of time before 20mph becomes the default across the whole UK. Read this prediction from Scottish Member of Parliament Mark Ruskell.

Elsewhere 30km/h limits are definitely becoming the norm. In 2022 Spain published its 2021 casualty figures with a 20% drop in urban fatalities and referred to the national 30km/h limit set in May 2021 as one of the main factors. Greece is following Spain in setting 30km/h for residential areas. Latvia is discussing a 30km/h national limit. Denmark, Sweden and Netherlands say they already have 30km/h as a norm. France has 30km/h in most French towns and the Paris Mayor now has plans for the whole of the city to be 30km/h. In USA 25mph limits for residential roads are increasingly being changed to 20mph. Ireland has already set up a Task Force to look at how to set a 30km/h default and 20’s Plenty were asked to present at their Road Safety Authority International Conference on Speed.

Councillors are beginning to understand the popularity of 20mph limits and with many council elections in May 23 this is bound to be a hot topic. Wales will be implementing its national 20mph limit in September and this will be preceded by a strong engagement campaign. 20’s Plenty will be looking to develop its assistance to campaigners and its influence with transport professionals.

It has been a great pleasure to work with the 20’s Plenty team and all the campaigners who have made the success that 2022 has been.

My best wishes for the New Year and all the challenges and opportunities it will bring to make all our places better places to be.