20mph win for Seattle and 30km/h News from Europe 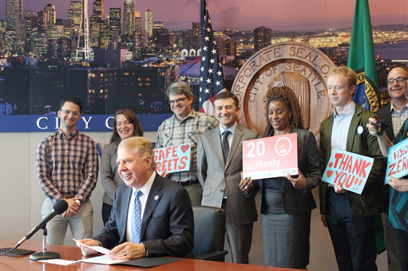 Seattle Neighbourhood Greenways have campaigned well for 20mph. We applaud another winning 20’s Plenty for Us overseas branch and Gordon Padelford and Cathy Tuttle.  Lower limits on neighbourhood streets from 25mph to 20mph will come in later this year. On arterial streets, authorities will determine limits on a case-by-case basis. The default will go from 35mph to 30mph, and on downtown arterials it will be 25mph. New limits cover 2,400 miles of streets. Cathy and Gordon credit strong community support and leadership from Mayor Ed Murray and Council member Tim Burgess for this success.

Worldwide there is regular news of places agreeing 20mph/30km/h as the right  built up area speed.  Most towns in Norway, Sweden and Holland have 30km/h limits. In May this year Dublin agreed a default 30km/h limit1. 38% of the Swiss population live in 30km/h areas[1]. Grenoble, Valencia, Milan[2] and Paris are more examples of European cities agreeing a 30kph default.  See http://www.20splenty.org/20_for_paris.  Exceptions are just a few arterial routes, roads along the Seine’s banks (50km/h (30mph)) and the peripherique (down from 80km/h to 70km/h (45mph)). Paris’s lower speeds cover 105 km2 and 2.25m people. Madrid has 30km/h in its centre district[3]. Barcelona has extensive 30km/h streets[4].

Over 25% of the UK population live in 20’s Plenty committed places including, in 2016, Cheshire West and Chester, Cardiff, Hammersmith and Fulham, plus consultations supporting 20mph in Croydon and Wandsworth.  http://www.20splenty.org/20mph_places shows 15.5m people.

20mph limits are best practice for public health according to the World Health Organisation[5]. If your town isn’t yet 20mph or 30km/h then contact us for campaigning advice. Join 330+ 20’s Plenty for Us branches making streets better places.