Why not "self-explaining" roads?

I have been having a discussion on LinkedIn with some engineers on the choice of building "self-explaining" roads rather than wide-area speed limits after posting this infographic.  My response was rather too long for the usual character limit on LinkedIn, hence it initiated this blog. 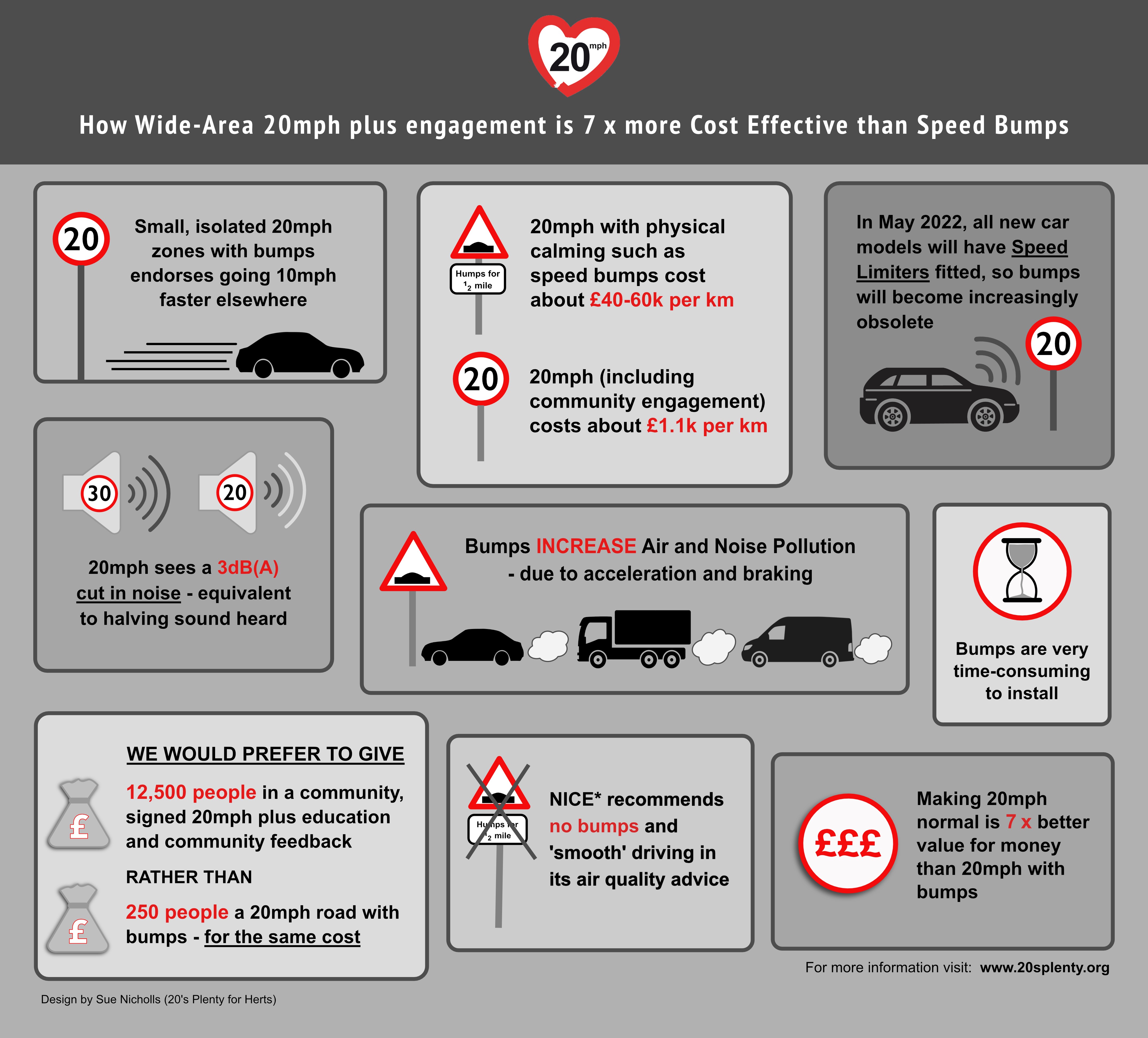 Of course, I accept that there are better alternatives to speed bumps in creating what some call "self-explaining" streets and gaining a reduction in speed. But much of the arguments about high cost and limited delivery still apply to speed tables, chicanes and other methods to "fool" the driver into going slower. If we accept the benefits of slower speeds then should we be focused on delivering it to every neighbourhood rather than just a few based on limited money and engineering/design/build resources.

My thoughts on "self-explaining" as a method for speed reduction also go to motorways. If "self-explanation" is so vital for setting a speed limit and gaining compliance, then why are motorways quite capable of handling speeds of 200km/h and have speed limits set far lower which are complied with. I would suggest that it is because drivers recognise that the risk at such speeds is to the users of the roads who are exclusively drivers and their passengers.

We have to ask ourselves, what is it about our culture that allows us to comply with limits less than the design speed when the risk is to ourselves, yet in a people environment, (I know "urban" environment is the usual term), the risk is to the people outside of the cars. Why do we need the "self-explanation" of concrete? How about the self-explanation of children with squishy bodies or the frailty of the elderly pedestrian. Shouldn't we be sensitising ourselves to the needs and risks posed to those outside cars rather than spending billions of dollars in fooling drivers to go at an appropriate speed to protect the vulnerable in our society.

Of course, some that are less generous than myself would say that the last generation of civil engineers has had decades and billions to create an urban and village landscape that is hostile to pedestrians, cyclists and, let's face it, anyone not using a car, and the next generation of civil engineers is asking for decades and billions to reduce the speeds by fooling drivers into doing the right thing and correct what their previous generation has created.

And this is all before we start to contemplate the challenges of micro-mobility. E-bikes, e-scooters, e-cargo bikes, personal mobility pods, etc.

And with the technology we now have on Intelligent Speed Assistance (mandatory in all new car models in EU from 2022), Automatic Number Plate Recognition cameras, etc. There is a simple solution. Set the right speed limit of 30kmh or 20 mph as an urban default . Engage with the public on the squishiness of children/elderly, benefits of lower speeds for public health, active travel, air quality, social equality, etc, enforce it and set a social consensus that 20's plenty (mph) or that people Love 30 (kmh).

And the time to do that is now in 2021. Cities across the world are saying they can and have already done so. Countries like Wales, Spain and Netherlands have said they can and are setting national 30kmh or 20mph default limits. Its time to recognise that the right time is now. Our cities and villages are in need of transformation and lower speeds transforms them all. We need to make our places better places for all our people to be, rather than only those in cars. And that is why UN, WHO, OECD and so many looking at city-life and liveability say that 30kmh limits should be the norm with higher speed only where evidence that pedestrians and cyclists are safe.