A new app has been developed that enables any member of the public with a smartphone to gather video evidence of speeding for submission to police for processing and enforcement. This paves the way for wider enforcement and allows police and authorities to align with community demands for speed limit compliance.

Traditionally, enforcement of “speeding” offences could only use “prescribed devices” that rely on laser or radar technology with sophisticated requirements for both calibration and use. This has led some police forces to shy away from enforcing and supporting appropriate speed limits. 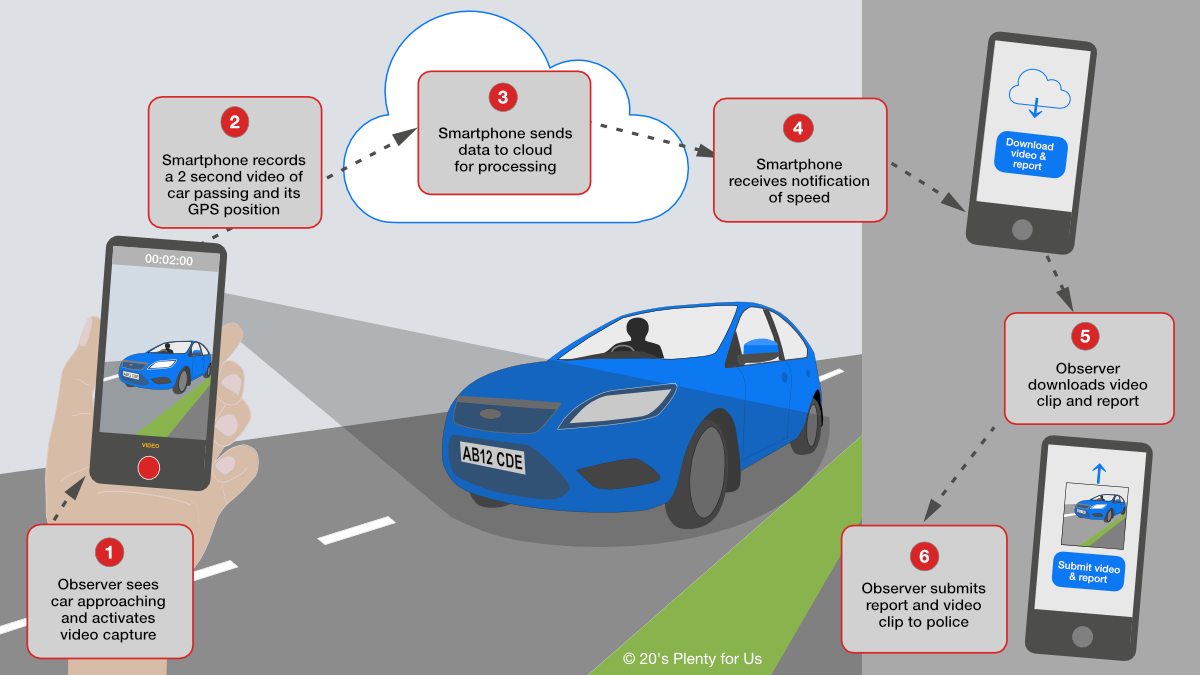 The new SpeedcamAnywhere[1] technology combines the video and processing capabilities of a smartphone to create a video snip of evidence which is automatically uploaded to the cloud for analysis. Powerful Artificial Intelligence algorithms in the cloud then uniquely identify the vehicle wheelbase so that its speed can be accurately measured from the video. An analysis sheet and accompanying video evidence is automatically emailed to the user. This may then be forwarded to the appropriate authority via a dashcam portal and used for a Section 59[2] offence regarding careless and inconsiderate driving at a speed that causes alarm and distress. This does not require the same “prescribed device” approval for the police to issue a Section 59 warning and if repeated even a seizure of the vehicle. The app is not critically dependent upon the angle of approach of the vehicle as long as the number plate and side can be seen in the video captured. An angle of approximately 45 degrees may be used with an approaching or departing vehicle.

The app essentially gathers video evidence and does not in itself determine the speed of the vehicle.  It is the analysis report which shows the location, speed limit, time and details together with photos of the vehicle, including registration plate, as it passes with key times together with the speed. The video snip is also available as primary evidence, together with a witness statement for signing.

The SpeedCamAnywhere AI technology replaces a manual process already being used by police to analyse dashcam videos to determine the speed for careless driving offences. Hence a precedent has already been set for such a process. Police resources used are minimal but it is the police force that determines whether to issue any Section 59 notices and so retains full control of the enforcement process.

20’s Plenty for Us volunteers are piloting the use of the app before general release.

Rod King, Founder and Campaign Director for 20's Plenty for Us commented :

“By allowing communities and local authorities to submit clear and unambiguous evidence of careless and inconsiderate driving this technology will be a game-changer in speed limit enforcement. It allows police forces to align with community needs for compliance without imposing an increased load on the police. We expect it to be welcomed by all those interested in making our communities safer.”

Read our blog on How it Works