In 2021, 417 people died on urban roads, 102 fewer fatalities than in 2019, a reduction in mortality of 20 percent in a single year unprecedented in the historical series

Grande-Marlaska: “When explaining this significant reduction in road mortality in our cities last year, I want to remember that on May 11, 2021, the speed limit of only 30 kilometers per hour on city streets came into effect. one lane in each direction of travel

The decrease in deaths in cities has been reflected in vulnerable users with a 34% reduction in cyclists, 31% in deaths over 64 years of age, 26% in pedestrians and 17% in motorcyclists

In 2021, 417 people died and another 4,142 were seriously injured in traffic accidents on urban roads, figures that represent 20 percent fewer deaths and 4 percent fewer hospitalized injuries than those recorded in 2019, the statistical reference year .

These data are included in the consolidated balance of road accidents for 2021 that the Minister of the Interior, Fernando Grande-Marlaska, presented this Monday in Toledo together with the Secretary General of the Spanish Federation of Municipalities and Provinces (FEMP), Carlos Daniel Casares, and the mayor of Toledo, Milagros Tolón, among other personalities.

"417 deaths is an unaffordable number, and we are going to continue working to reduce that figure, but 102 fewer deaths than in 2019 represent an enormous amount of suffering saved", said the Minister of the Interior, who added that "at the time of To explain this significant reduction in road deaths in our cities last year, I want to remind you that on May 11, 2021, the speed limit of only 30 kilometers per hour on single-lane streets in each direction came into effect.”

WHERE DID WE COME FROM?

2019 was a year in which the annual calculation of fatalities due to traffic accidents was reduced by 3%, a situation that did not occur in cities, since fatalities on urban roads increased by 6% compared to 2018, reaching 519 deceased.

This fact marked a turning point and the adoption of regulatory measures that could stop said road pandemic. The measure adopted was the modification of the speed in the cities, implementing 30km/h on roads with a single lane in each direction, with the aim of calming traffic. The measure entered into force on May 11, 2021.

"We wanted to make this presentation in Toledo, accompanied by the Spanish Federation of Municipalities and Provinces, because this city is a good example of commitment to safe and sustainable mobility despite its complex orography ", continued Grande-Marlaska, for whom " safe and sustainable mobility is a value worth betting on, and we are taking steps in the right direction to make our country a benchmark in urban mobility”.

On high-capacity roads (highways and expressways) there have been 316 deaths (7% less than in the pre-pandemic year) and on conventional roads, those with a single lane in each direction and without physical separation, the deaths have been 800 ( 11% less than in 2019).

There continues to be a problem with road accidents, since 11 out of every 100 deaths on our roads are due to accidents. Specifically, last year 118 people died when they were run over.

With data from urban and interurban roads, 2021 ended with 1,533 deaths and another 7,784 serious injuries, figures that represent 222 fewer deaths (-13%) and 829 fewer serious injuries (-10%) than in 2019, the reference year statistics and making 2021 the year with the lowest number of deaths and serious injuries in the historical series, not counting the year 2020 of the pandemic.

This decrease in the number of deaths has occurred in a context in which 393.7 million long-distance journeys have been registered, 8% less than those registered in 2019.

The mortality rate stood at 32 people killed per million inhabitants, one of the lowest in the European Union in 2021, and ahead of countries with a long tradition in road safety such as Finland (40), Austria (40), Belgium ( 43) or France (45). The average rate of the countries of the European Union stood at 44 deaths. 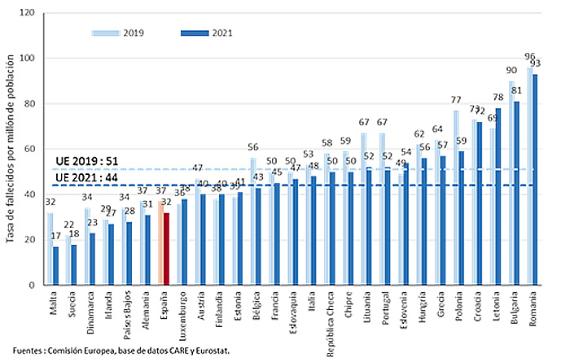