NOISE AND SPEED - A guest Blog from UK Noise Association

Reducing speed limits is the quickest, cheapest and most equitable way of cutting traffic noise. Slower is quieter.

Lower speeds also allow the noise benefits of electric cars to be spread more widely and are foundational for traffic reduction. 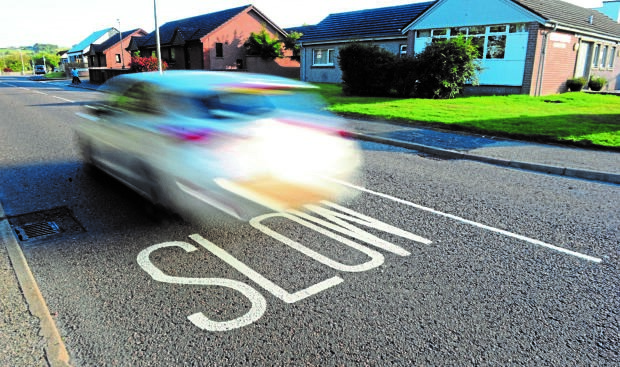 Cutting default speed limits from 30mph to 20mph would reduce traffic noise by around 3 decibels (1) - 3dB(A) in the jargon – and up to 6 decibels at peak periods (2). A cut of 3dB(A) would half the noise.  Yet, noise needs to be cut by about 10dB(A) before we hear it as half as loud, because of the way our brain processes noise.  If lower speed limits were combined with steadier acceleration and braking, the results are more dramatic.  Aggressive acceleration increases noise by as much as 6 decibels (3). So a 20mph limit, plus calmer acceleration, could cut noise by nearly 10dB, the equivalent of halving what is heard.  This May Wales agreed that 20mph will replace 30mph as the national limit (4). Transport for London is consulting on 20mph for its red routes in the congestion charging area. The proportion of heavy lorries is also a factor as lowering speeds has less impact on their noise.  Note that cutting higher speed limits also reduces noise.  A modelled speed limit reduction from between 60 and 70 mph to 40 mph on the M32 urban motorway in Bristol was predicted to cut noise by 3 - 5dB(A) (5).

Electric cars will cut noise significantly at speeds of lower than about 25mph.  So much so that at very low levels of less than 12.5mph artificial noise will need to be added to warn people a vehicle is approaching.  But at speeds of higher than about 25mph (in some vehicles maybe up to 35mph) the noise benefits of electric vehicles will be much less.  This is because at these higher levels tyre noise, rather than engine noise, dominates and electric vehicles will not cut noise from tyres. This means that to get the most benefit from electric vehicles higher speed limits would need to be cut.

Lower speeds are equitable.  Reduced noise levels are of particular benefit to low-income communities who are more likely to live beside busy, fast roads: “Traffic noise, certainly in urban areas, has almost become only a main road problem (since many ‘residential’ roads have been traffic-calmed: cutting traffic volumes, speed and, usually, noise.”(6)  The safety benefits of lower speeds (2) also bring most benefit to ‘those living in the most deprived areas’ as well as the young and the old (7), because of their vulnerability.

WS Atkins (8) found that the introduction of 20mph speed limits had produced small increases in the proportion of people travelling on foot or by bike, stating that: “...there has been a small (but significant) increase in the proportion of survey respondents stating that they have increased their use of active travel modes. Some 5% of residents surveyed said that they are walking more, and 2% said that they are cycling more, since the introduction of the 20mph limits...in addition, a small proportion of households with children reported that their children are cycling locally more often since the introduction of 20mph limits”.  If this results in fewer vehicles on the roads, noise levels would fall. Edinburgh reported 3% fewer car trips due to 20mph limits (9).

Impact on Climate and Air Pollution

A 20mph limit is the equivalent to taking over half the petrol cars off the road and so cutting air pollution (2). The relationship between climate emissions and speed is more complex.  CO2 emissions are highest at speeds of less than 20mph after which they level off before rising a little at speeds above 50mph.  But, overall lower speeds would reduce emissions (10).

Lower Speeds and the Economy

Detractors say lower speeds will damage the economy as it will slow down freight lorries and people driving on business.  This argument is given little credence in a comprehensive report on speed from the RAC Foundation (11).  It found that ‘journey-time savings are often small’ and that congestion was the real problem, quoting the study by Sir Rod Eddington into the long-term links between transport and the UK’s economic productivity which concluded that ‘eliminating existing congestion on the road network would be worth some £7–8 billion of GDP per year.’

Call to action – The UK Noise Association lobbies for slower speeds. You can keep-up-to-date via our website http://www.ukna.org.uk or facebook page or by following us on twitter, @cutnoise. You can also help by joining 20’s Plenty for Us, www.20splenty.org where you will find a range of actions you can take. We ask drivers to drive less often, more steadily and slower.