Communications with the government on default 20

Since launching our campaign on April 9th in support of doctors calling for an emergency default 20mph urban speed limit we have had a number of communications with MPs. ministers and DfT officials. This provides a useful insight into the thinking of the government and its attitude to speed limits. The emails and letters are provided along with our responses.

One month after launching our campaign, I emailed all Conservative MPs asking them to also support the medics calling for such an emergency national speed limit. I also provided a copy to Rt Hon Grant Shapps, Secretary of State for Transport.  See email here. Remember that this was calling for an emergency national change of default urban speed limit to 20mph to lower the load on the NHS from road casualties, especially as lock-down was eased.

On the 10th June I received an email from Charlotte Bradford who "works with speed policy in the Road User Licensing, Insurance and Safety Division of the Dept for Transport. She was asked to respond on behalf of the Secretary of State. See her reply here.

I immediately responded with my email critiquing her response. You can see the email here. But it may be useful to see how my response critiqued her reply section by section .

Thank you for your letter commenting on our letter to the Secretary of State and Conservative MPs. Perhaps I may make some comments on your reply as I think it misses some of the key aspects of setting a national speed limit which we may not have communicated adequately.

Regarding local authorities having the power to set local speed limits, this is really part of the problem. They can do so in order to vary from the norm as set in the national limit. This works well where the roads that need a different speed limit are exceptions or in the minority. In such places where the topology, usage, demographics, etc are different from the norm then this is appropriate. Where such exceptions exist then it is appropriate to use signage or other methods to indicate the “unusual” speed limit. It worked well when 20mph limits and zones were sparse and isolated exceptions. However, we now have situations in authorities around the country where under the DfT guidelines they are setting 20mph as the correct and appropriate limit for most roads. These include most of our largest conurbations, including all the Inner London Boroughs. Treating 20mph as such an exception does impose considerably higher costs on traffic authorities, particularly for repeaters signs. This is illogical when most of the streets with lighting have a 20mph limit. Whilst purporting to provide consistency the process for setting 20mph limits for residential, high street and roads with potential (or actual) pedestrian and cyclist use on a local basis actually creates inconsistency. This inconsistency is created due to different traffic authorities having different priorities, funding and empathy with vulnerable road users and active travel aspirations. This is the reason why we have some towns with 20mph set for roads whilst other authorities may endorse a speed 50% higher for roads with an identical usage and physical proportions.

I recognise that the Department has no plans to set a national urban 20mph limit. I do prefer to use the word set rather than impose as it does sound a more positive intervention. Indeed, if it did have such plans then we would have a very different campaign.  The consideration of “evidence that average speeds fall……” is rather irrelevant to the issue. Traffic Authorities with some 18m inhabitants have already recognised that most of their urban roads meet the character and  parameters to qualify for a 20mph limit. It is illogical to suggest that most of the urban streets in other Traffic Authorities are any different in such parameters and character. The only logical conclusion is that either the speed limit set for the majority of urban streets for those 18m people is 33% too low or that the limit set for the rest of the population is 50% too high.

It is also illogical to argue that setting a national 20mph limit would require any more enforcement than that available to Traffic Authorities when they set 20mph limits. The same criteria would apply to enable them to set a 30mph limit for any lit-road exceptions where a 20mph limit would not be deemed to be appropriate. And, of course, it would be far more effective and economic for publicity to be done to support a national 20mph default than the current situation where Traffic Authorities have to counter the “30 for a reason” national publicity. The issue of out-liers who may exceed any speed limit should not be used to maintain a speed limit and endorse speeds 50% higher than is appropriate. To do so implies setting a speed limit based on the criminal actions of illegal drivers. Can you imagine an argument that resists an appropriate drink drive limit on the basis that it would not make any difference to someone drinking 6 pints of beer?

Of course it is useful for Road Safety GB to encourage all users to take extra care when travelling. However, the speed at which they drive will be condition by the speed limit set and there is a 50% disparity between urban streets set with a 20mph limit and identical streets that have a national 30mph limit. Regardless of the call to “take care” their reference point will be the speed limit and if that is 50% too high then so will be the reference point.

We have speed limits set nationally for motorways, non-urban roads and lit roads. They are changed as conditions and societal needs change. Hence the recent increase in the 40mph limit for HGVs on non-urban roads to 50mph. A default urban 30mph limit has been rejected as “not fit for purpose” by so many Traffic Authorities that it is no longer credible. A generic 30mph or 50km/h urban limit has been discredited by WHO, OECD, ETSC and so many Public Health and NGOs. Baroness Vere of Norbiton on behalf of the government recently signed the Stockholm Declaration that resolved :-

“We, Ministers and Heads of Delegations as well as representatives of international, regional and sub-regional governmental and nongovernmental organizations and the private sector gathered in Stockholm, Sweden, on 19 and 20 February 2020 for the Third Global Ministerial Conference on Road Safety;…… we hereby resolve to;……

Focus on speed management, including the strengthening of law enforcement to prevent speeding and mandate a maximum road travel speed of 30 km/h in areas where vulnerable road users and vehicles mix in a frequent and planned manner, except where strong evidence exists that higher speeds are safe, noting that efforts to reduce speed in general will have a beneficial impact on air quality and climate change as well as being vital to reduce road traffic deaths and injuries;”

Perhaps you could clarify on how the resolution made by the Baroness impacts upon the Departments commitment to change in the area of “speed management”.

The government is losing this opportunity to not only create safer streets for all, but also to lower the load on the NHS that comes from the 75,000 casualties per year on streets with a 30mph limit.

Whilst I accept that you have been charged with making the case for maintaining the 30mph limit set in 1934, I am afraid the case is not compelling enough for 20’s Plenty for Us to accept it. Notwithstanding this, we would be pleased to work with you and government ministers to find ways to set a 20mph on most urban and village roads which we believe is the considered best practice in transport, urban planning and public health terms.

I am awaiting a response from Ms Bradford - This blog will be updated when it is received.

On 16th June I received an email from my own MP Andy Carter who had contacted Baroness Vere and recieved a reply. Baroness Vere is the Parliamentary Under Secretary for Road Safety and actually signed the Stockholm Declaration on behalf of the government. Her reply is here.

Much of this is similar to the letter from Charlotte Bradford. However her comment on the Stockholm Declaration is interesting:- 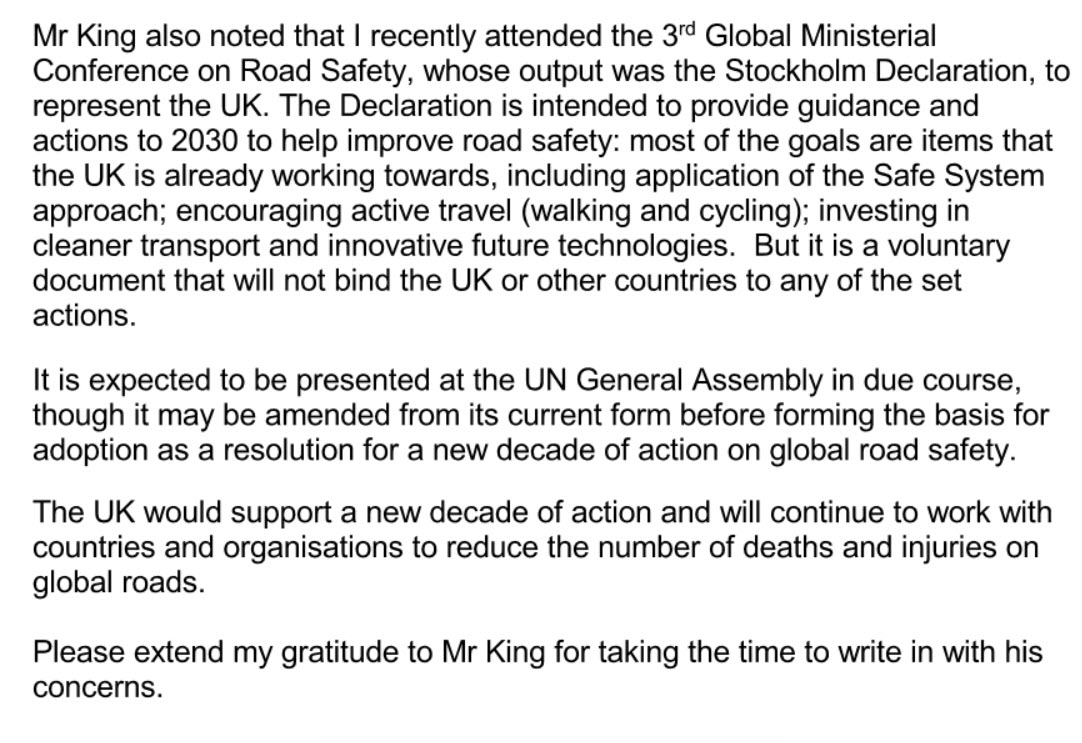 Now the full text of the Stockholm Declaration may be viewed here. I am not an expert in International Law or protocol. But we seem to have a case of the government publicly, and in the company of an international group of ministers, resolving to do something and afterwards claiming it was "intended to provide guidance" and is a "voluntary document that will not bind the UK or other countries to any of the set actions". My view is that regardless of any international commitments, this is a commitment made on behalf of and to the UK public. I do not think it acceptable that in an international arena the government should resolve to do something and then in a domestic arena claim that this was only guidance and not binding. It does matter that when the government resolves to take a course of action that it should follow up that commitment with the intended action. Otherwise you may ask what is the point of signing such a resolution.

It is worth noting that in the annual review of road safety performance by the European Transport Safety Council which assessed the performance of all European countries, UK was 3rd from the bottom in the table of reduction in road fatalities between 2010 and 2019. In fact in the UK the number of fatalities had increased between 2010 and 2019. See the full report here.

I noted a tweet from one Road Safety Organisation in response to this saying :-

"After a decade of hearing @transportgovuk talk about 'world leading performance with no room for complacency' at what point do we acknowledge that this is precisely what complacency looks like?"

In fact the UK no longer has a "national urban speed limit". It has been recognised as "not fit for purpose" by local authority after local authority. This includes all Inner London Boroughs, the majority of the largest 40 urban traffic authorities, many counties and Wales. Such authorities have been obliged to incur additional signage and other costs from having to set exceptions to the national default. This is due to government inaction and complacency in not recognising the inadequacy of its insistence on keeping a default 30mph limit as set in 1934. By loading all the responsibility and costs of departing from such a failed default the government is abrogating its responsibility to set a consistent and appropriate national speed limit where motors mix with people whether they be cycling, walking or simply enjoying their community public spaces. By requiring 20mph limits to be "exceptions" to its 30mph default the government provides comfort to non-compliers and inaction by some police.

In 2010 the House of Commons Transport Committee published a report "Ending the Scandal of Complacency: Road Safety Beyond 2010". Within this (sections 57-60, page 17) was a discussion of the benefits of 20mph limits set at a national level. It is a sign of that continuing complacency that 10 years on and with all the body of global opinion favouring 20mph/30kmh as the correct speed limit for urban/village roads the government is still failing to take the initiative in setting this as a national default limit.  The Scandal of Complacency still exists!