Its great to see Bilbao adopting a 30kmh (18.5mph) limit for most streets. 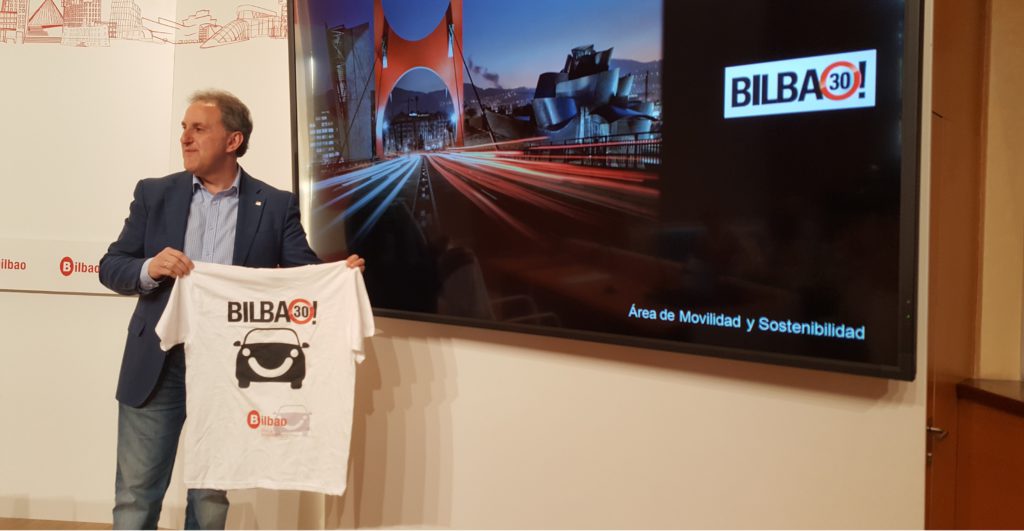 Bilbao: Maximum speed of 30km / h in all streets "In Bilbao we live 30 times better", this is the slogan of an information campaign that has started today, to announce that as of Saturday, June 30, the speed limit in Bilbao will be at 30 km / h.

The campaign focuses on highlighting the benefits that this cross-sectional measure, collected in the recently presented PMUS, which aims to calm traffic, change driving habits and reduce the environmental pressure related to air pollution, as well as the acoustics.

When air pollution also decreases, the neurotoxic effects that pollution has on health will be considerably reduced. Less gases will be emitted, which will contribute to a general improvement of health, helping to mitigate climate change, since at a lower speed we will significantly lower CO2 emissions.

Not all streets will see the speed limit reduced to 30 km / h as there will be roads through which you can drive at 50 km / h. They are streets, or stretches, that serve as a connection with high capacity roads or highways, are entrances or exits of Bilbao, or connect neighborhoods. This is intended to enable greater traffic flow and among them are Sabino Arana, a section of Alameda de Rekalde, Juan Antonio Zunzunegui, Avenida de Zumalacarregui or Maurice Ravel.

In the capital of Bizkaia there are a total of 377 kilometers of streets, of which 87% will have a speed limit of 30 km / h and the remaining 13% will correspond to roads where it can be driven at 50 km / h.

The Deputy Mayor and Delegate Councilor of the Area of ​​Mobility and Sustainability of the City Council of Bilbao, Alfonso Gil said that this campaign also seeks to mentalize motorists, and the general public, of the bonanzas that has to circulate at 30 km / h by Bilbao. "We continue to work to make Bilbao a model of a different city, in which we prioritize the use of more sustainable means of transport such as cycling. The level of traffic noise will be considerably reduced and it will also improve air quality, which is a way to show that we live thirty times better in Bilbao, since our health will also improve. "

Reducing the speed to 30 km / h in the city entails improving road safety, since it allows to increase the field of vision, establish greater visual contact with other users and, in case of abuse, reduce the lesividad: according to the WHO in a run over at 50 km / h the risk of being fatal is 8 times higher than if it were produced at 30 km / h.

Traffic is also the main cause of noise in the municipality, which produces more severe impacts on noise pollution, a problem very common in large cities. Circular at 30 km / h entails a huge reduction in the noise level given that at that speed they correspond to only 3 decibels.

In addition, the measure also allows to increase energy savings, by reducing fuel consumption and change in driving habits.

Reducing the speed to 30 km / h is an economical and efficient way since it can help to considerably reduce the number of traffic lights and traffic signals, which implies an important saving for the municipalities, as the study shows that the Cities that Walk has made in the municipalities that have already implemented the standard speed of 30 km / h and that are part of the Alliance of Cities 30 km / h.

Henceforth, walking, cycling or using public transport in Bilbao will be more pleasant activities. In a city like Bilbao, where mobility on foot is 64%, a balance has been sought between all modes of transport, meeting the criteria of sustainability, so as to improve the cohabitation of all the people who travel through the city on foot or by any means of transport.

In addition, establishing this limit allows to increase the permeability of the urban fabric, allowing the greater fluidity of bicycle traffic.

The City Council will apply the measures contained in the SUMP, which is the plan that sets the course and coordinates the actions on sustainable mobility of Bilbao for the 2016-2030 horizon with the priority of achieving a healthier, more sustainable and efficient city model that results in the improvement of the quality of life.

During these days an "Infobilbao" is being set up in 150,000 homes, to inform the public of the implementation of this campaign, and the Bilbobus buses will present a label with the slogan "In Bilbao we live 30 times better". The information campaign will be combined with street marketing actions in the main arteries of entrance to the city where an explanatory drop-down will be distributed detailing the streets bounded at 30 km / h and where you can drive at 50 km / h.

In 1983 the first zone of 30 km / h was established as a pilot project in the small German town of Buxtehude. Then, many other cities throughout Europe and the rest of the world have proven their benefits in urban centers, neighborhoods and areas close to schools. Pontevedra was the first Spanish city to bet on the city 30 in all its roads in 2010 with highly positive results. Currently Ansoáin in Navarra, and Irún in Guipuzcoa, have also launched this measure.

Other large cities, such as Madrid or Barcelona, ​​have also applied zones 30, but always limited to the urban center, or some streets or areas, with special characteristics.

Bilbao, therefore, becomes the first Spanish city of its characteristics (size) to apply the measure to all its streets.