London is making excellent progress in adopting wide-area 20mph limits across its many boroughs. Already 43% of all Londoners are living on 20mph roads and streets with a 20mph speed limit (3.7 million out of a total population of 8.7 million). In the Inner London boroughs more than three-quarters (76%) of the population is living on 20mph streets and roads (2.3m out of a 3.1m population). 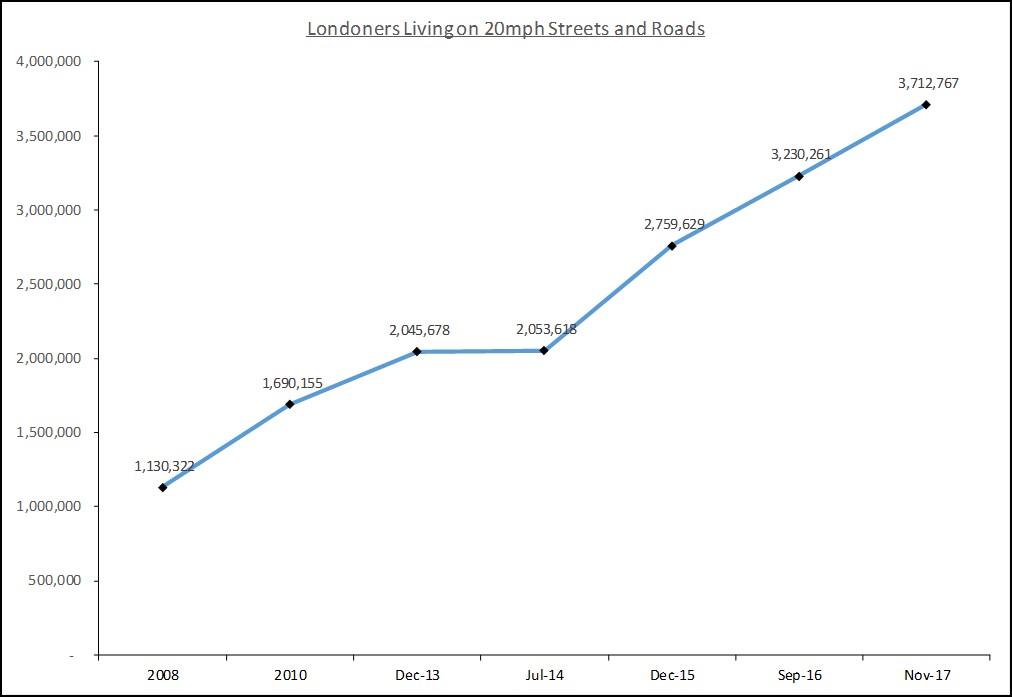 The latest news on 20mph in London is:

• As of November 2017, ten London boroughs have 20mph limits on all/almost all of their
borough-managed roads -Islington, Camden, City of London, Southwark, Lambeth,
Lewisham, Tower Hamlets, Hackney, Haringey and Hammersmith & Fulham.
• TfL now has 20mph limits on the Red Route network (TLRN) in a large number of
locations in Central London and has confirmed that trials will be undertaken in the near
future at other locations. Camden St and Earl’s Court Road are the latest TLRN roads to
go 20mph (Autumn 2016).
• Five of the central London bridges will become subject to 20mph limits.
• May 2017 - London Borough of Croydon announces that it intended to make all of its
residential roads and a number of its more major roads (but not arterial roads and bus
routes) 20mph.
• Following the successful consultation in 2015, in March 2016 the Hammersmith &
Fulham cabinet agrees to an experimental 18-month trial of a borough-wide 20mph limit
on all residential roads and a large number of main roads across the borough. The
experimental scheme was made permanent by the Cabinet1 on Tuesday 4th September
2017 and is effective from 11th September 2017.
• In January 2016 LB Hounslow confirmed the roll out (over a four-year period) of 20mph
limits for all residential roads and main roads on which there is significant pedestrian
activity and on all roads in the Chiswick area.
• Wandsworth. Summer 2016 consultation shows 59% in favour a borough-wide 20mph
limit on all residential roads. Implementation completed June 2017.
• September 2016 - Westminster announces trials of 20mph on its street with the details
of the locations confirmed in autumn 2017 and including a two wide-area schemes.
• Ealing announces the introduction of a new urban speed limit policy with a 20mph speed
limit in residential areas and town centres (subject to the outcome of consultation). The
year-long trial in the Acton area came into force on Monday 5th September 2016. The
borough now (November 2017) has 48% of its streets with a 20mph and the borough
aims to alter the limits on remainder of streets and roads in phases during the LIP period
2019-2021.
• (Autumn 2015) Waltham Forest, rolling out a policy of borough-wide 20mph limits on its
residential roads, has a successful consultation in Highams Park, its first area for 20mph
limits north of the North Circular.