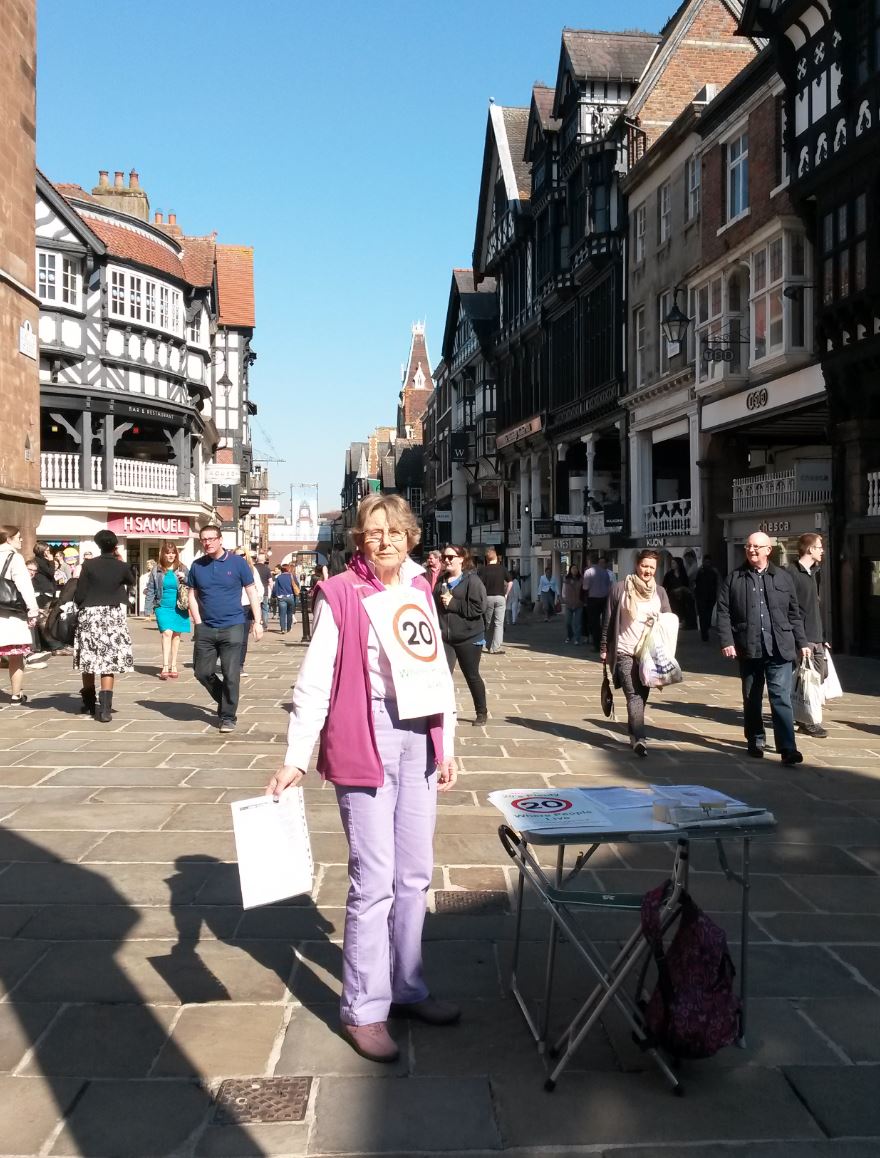 Over many years the campaign in Chester has been making the case for 20mph limits for residential and busy streets. Now Cheshire West and Chester Council have adopted a 20mph policy which is being rolled out. Here, local campaign leader Wyn Holroyd chronicles the progress made.

The campaign began in 2007 due to rumours of a former army camp near a residential area of Chester becoming 1000 new houses without attention to the road impact; an appraisal of the road conditions – speed, volume of traffic, congestion, pollution etc.- through which my grandchildren and other children journey to school.
The detailed appraisal of road shortcomings, plus solutions like calming measures was summarily rejected by the local authority due to not enough crashes and average speed (as measured by a totally useless method) in the low twenties!
Our 20s Plenty group is 3- 4 people. We suffered an enormous blow with the sudden death of Cllr David Robinson in 2014.
Campaigning strategies have included:-
In 2011 we organized a paper petition- the easiest to collect signatures that I have ever undertaken – accompanied by an on-line one. It was presented to full Council but was neither accepted or rejected as the majority Conservative group were hurriedly concocting a scheme to fit with the  “localism” mantra. This scheme turned out to be wholly unrealistic, costly and unworkable. As Cllr Robinson, our staunch ally on the Council said with his amiable grin, “You don’t want to do anything, do you?” – and they didn’t. Tragically, David did not live to see his party’s change of fortune in last year’s May elections when a Labour led Council was narrowly returned. Crucially, the 20mph default was in the Labour Manifesto and no time was lost in costing and preparing its implementation over 4 years throughout Cheshire West and Cheshire.
We were helped by the expertise of Rod King, in person, at crucial Cabinet and Scrutiny meetings early in 2016 and by his and Anna Semlyen’s unfailing help and inspiration throughout. We cannot sit back, because this policy refers solely to “residential” roads. We shall still have to push for “Total 20”.
In conclusion, we refer you to Rod and Anna’s emphasis on dogged persistence.... and then hope for a visit from Lady Luck! We could not have imagined being in this position a year ago!
council
Do you like this post?
Tweet