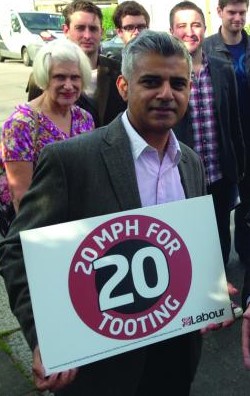 The London mayoral candidate with the pledge to support 20's Plenty for Us wins election. In his election manifesto, Sadiq Khan said "I will encourage the roll out of 20mph zones across the city by backing the '20’s Plenty For Us' campaign". And with other candidates also committing to 20mph limits then this was a common theme across the election.

London has been progressively adopting 20mph limits for most roads in many of its boroughs. Already 75% of inner London boroughs and overall a 1/3 of the London population have 20mph limits on the streets where they live. And in doing so it both joins and sets the pace for so many of the UK's iconic cities. In July Edinburgh will be rolling out its 20mph limits in the city centre and across the authority. Cardiff has committed to city-wide 20mph and Belfast has just adpoted 20mph for its city centre. Other cities such as Newcastle, Birmingham, Bristol, Manchester, Liverpool, Oxford, Cambridge, York, Bath, Coventry, Leicester, Nottingham and Brighton have said that 20's Plenty where people live, work, shop and play.

Here are the final results for the top 4 candidates showing their 20mph policies :-

Rod King, Founder and Campaign Director of 20's Plenty for Us commented :

"This is an excellent endorsement of the popularity of 20mph limits with residents and voters. We know from government backed British Social Attitude Surveys that 73% of people support 20mph limits for residential roads. We expect the growing adoption in London boroughs to be pivotal in 20mph becoming the national default limit for residential and urban streets. We wish the new mayor every success in his new role."

See the progress of 20mph limits in London Boroughs here