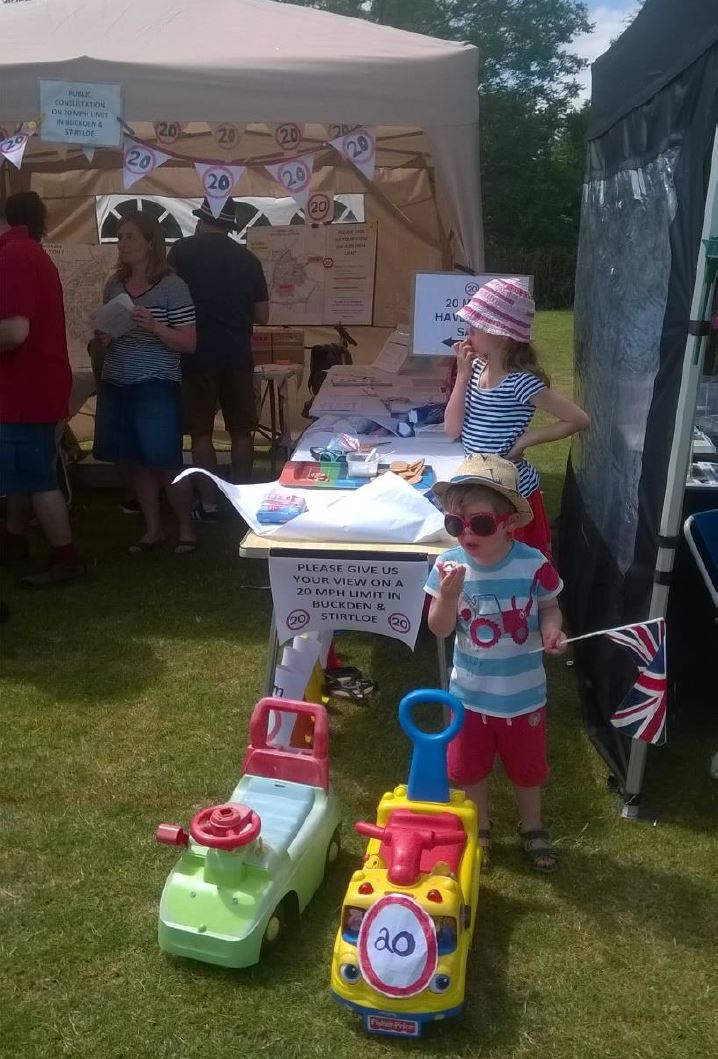 General concern by a number of parents about speeds around the school and a fatality motivated action.  More signage, Speedwatch and traffic calming were initial options. Amy Burbidge knew of 20s Plenty and suggested that 20mph throughout Buckden would be both cheaper and faster to deliver.  Support from Villagers was galvanised quickly with a petition which grew to 700+ names.  Advances came from a team of willing helpers (including Rick Screaton, who plans military campaigns as a career!) who focused on lobbying the, initially reluctant, Parish Council.  Consistent, helpful support was received from the County Councillor, MP, local businesses, school, nurseries and GP Surgery.  The Village Summer Festival was great for gaining interest with 20s Plenty games and 20mph roundel biscuit decorating.  Twitter and Facebook have raised awareness.  A3 bin stickers are displayed prominently through the Village. Yet, most of the support demonstrated was from a traditional paper petition in key village locations and by talking to people.

All this helped persuade the Parish Council (plus three 20s Plenty campaigners joining the Council as Councillors!) to vote for 20mph for over third of Buckden.  Area-wide limit funds were applied for from Cambridge County Council under the Local Highways Initiative grants for up to 90% funding to be matched by the Parish Council.

Amy said “We are perhaps lucky in that Cambridgeshire seems very supportive of area wide 20mph, having done so much in Cambridge city centre so the real challenge was persuading the Parish Council”.   The area-wide limit bid was successful, yet the Parish Council is nervous to implement it as their polling shows just under half of respondents don't want to change the status quo.   The compromise is a large zone for a third the Village.

Scheme design and final costings are for spring/summer with implementation by the end of 2016 for about £5,000.  Ongoing monitoring and surveys are planned to use this success as a first phase with the campaign continuing to tackle the rest of Buckden.